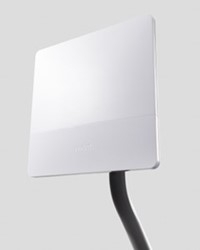 “I look forward to working with Vivint to pioneer a new wireless Internet deployment model.”

To ensure that customers have maximum speeds, even during peak evening periods, Vivint uses a unique “hub home” deployment model. Vivint beams high-speed data from local fiber optic access points to a hub home located centrally in a neighborhood. The hub home then relays Vivint Internet to nearby customer homes. This approach maintains the speed and integrity of the signal, ensuring that networks are not overburdened, even during the busiest hours.

Vivint Internet speeds are more than nine times faster than the average connection speed in the U.S. (11.1 Mbps) reported in Akamai’s Q4 2014 State of the Internet Report.

“With Vivint Internet, customers finally have an alternative for truly fast, reliable broadband,” said Matt Eyring, chief strategy and innovation officer at Vivint. “Many Americans have become resigned to Internet with slower-than-advertised speeds, spotty performance and abysmal customer service. Vivint Internet is faster than the top DSL speeds offered by any other provider, eliminates the dreaded 7 p.m. slowdown and is backed by our award-winning customer service.”

More than 15,000 customers are already using Vivint Internet in several pilot cities, including San Antonio and El Paso, Texas, and many cities throughout Utah. Vivint plans to expand its Internet service to three new markets by the end of the year, and to eight new markets in 2016. Given that new network deployments do not require significant underground infrastructure, Vivint can roll out its wireless broadband service to new markets within two to four months of initial announcement.

Vivint also announced that wireless technology pioneer and Stanford professor Arogyaswami J. Paulraj has joined its team as a technical advisor. Under his direction, Vivint has developed patented radios and antennas to achieve fiber-fast speeds through the air.

“Vivint is pushing the boundaries of Internet technology, and I’m excited to be a part of this innovation,” said Dr. Paulraj. “I look forward to working with Vivint to pioneer a new wireless Internet deployment model.”

Vivint Internet offers up to 100 Mbps for a standard price of $59.99 per month, with promotional pricing available in select areas. Customers can also add to any package Vivint Voice, a VoIP service, for $14.99 per month, and/or cloud storage with Space Monkey for $9.99 per month.